Have you ever tried dipping french fries in ice cream? It sounds strange but surprisingly delicious. Let’s discover this perfect match with Annam Gourmet!

The phenomenon is scientifically explained by the opposing combination of flavors, creating a balance of tastes and various textures:

At Annam Gourmet, you can create your own difference when combining McCain potatoes, the number 1 brand in the U.S., with various Homemade ice cream flavors. 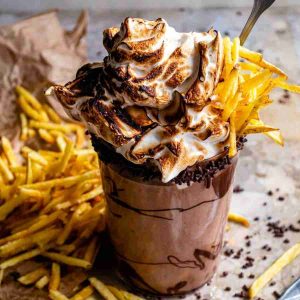 If you have ever seen the Ratatouille movie and can’t help but crave for the signature vegetable stew, let’s join us to remake the scene with our simple recipe!

Ratatouille is a rustic dish of the Provence countryside in France, originating in the Nice city. This traditional dish is the crystallization of many vegetables together that provides many health benefits. Not only being ubiquitous and appearing in every French house, Ratatouille gradually gained reputation and became a signature vegan dish at several fine-dining restaurants in France.

Annam Gourmet provides you the freshest farm-to-table veggies to prepare this home-cooked recipe and enjoy this prominent Ratatouille dish like a professional French food critic.

With just 3 simple steps accomplished in our app, you will get a free baguette/coffee from Annam Gourmet! Check out now!
Download the Annam Gourmet app at http://bit.ly/annamgourmetapp and enjoy it right away!

If you’re a busy but healthy-living person, you’ll probably love this wrap recipe.

You can prepare a nutritious meal in advance with this recipe and spare yourself some time even in the morning or at lunch while ensuring your meal’s nutrition. You could also customize the recipe by adding more of your preferable fresh veggies.

A gift not only shows the giving’s heart but also represents their personality and caste. This festive, Annam Gourmet would like to present the must-have Mid-Autumn gifts with delectable mooncakes, teas, and wines, elegantly packaged and exquisitely decorated. You can also customize your gift boxes as your interests for expressing gratitude, and goodwill toward those in your gift-receiving. 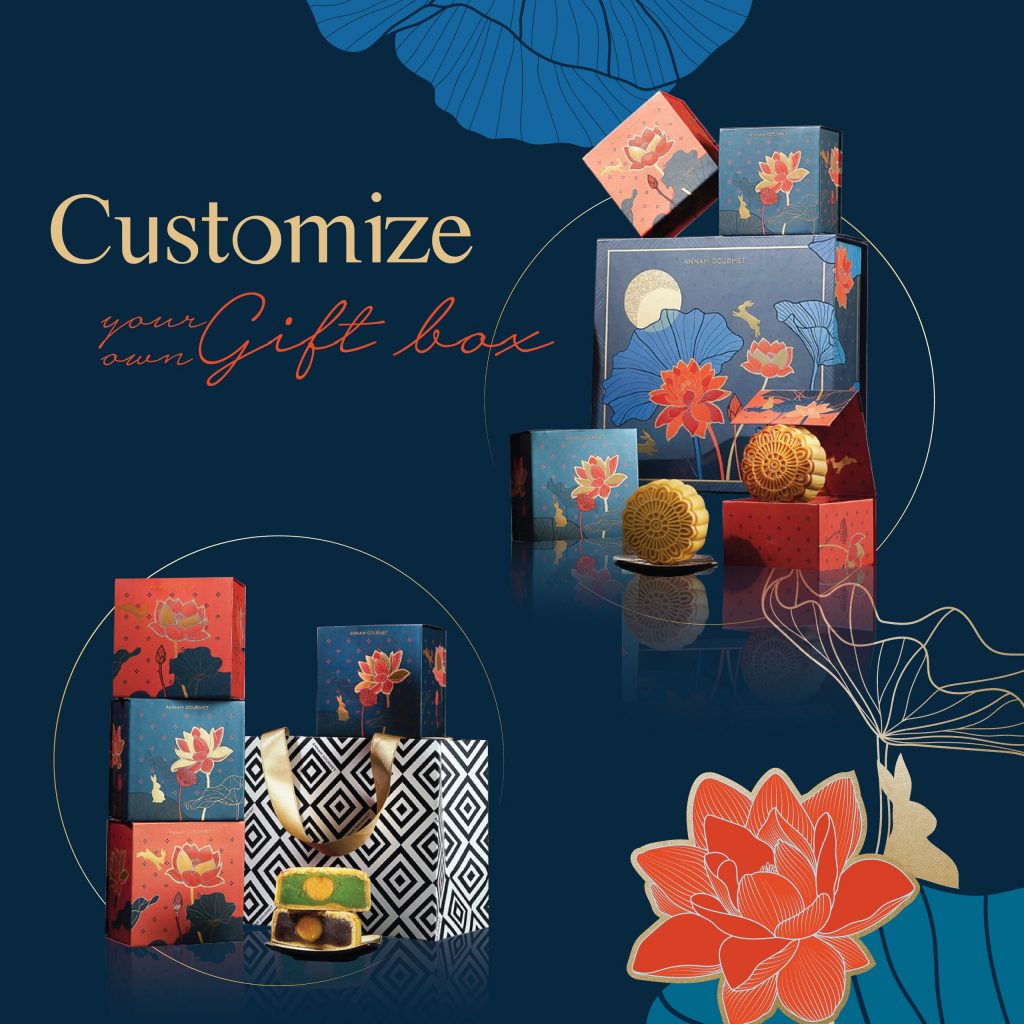 If you are bewildered by the variety of pasta shapes available, let’s get your head around with our useful guide on numerous pasta’ shapes and compatible sauces below.

There are many different types of pasta, each with a distinct serving taste. When it comes to cuisine, the Italians are quite strict with their own protocol. If you want to try all kinds of pasta shapes, let Giovanni Rana guide you. Indeed, some shapes and sizes are better suited to keeping sauces in their ridges, while others are better suited to baked meals. Let’s look up the best sauces for each pasta shape in our Pasta 101 Dictionary.

Recommend: Paired gnocchi well with sauces based on tomatoes or creamy ones like pesto. 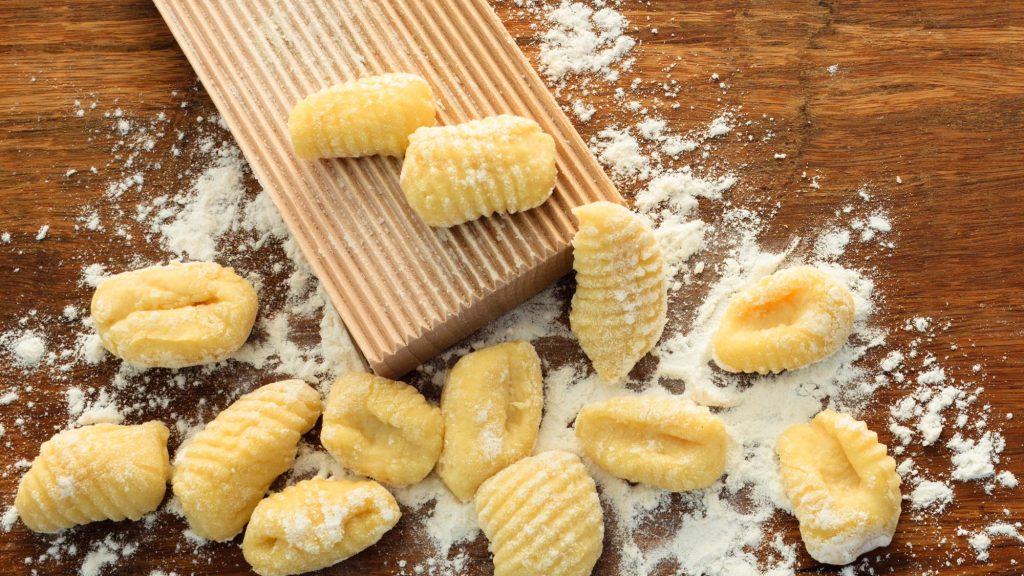 Recommend: A variety of sauces, both light and heavy can be topped with ravioli or simply paired ravioli with butter and/or oil. 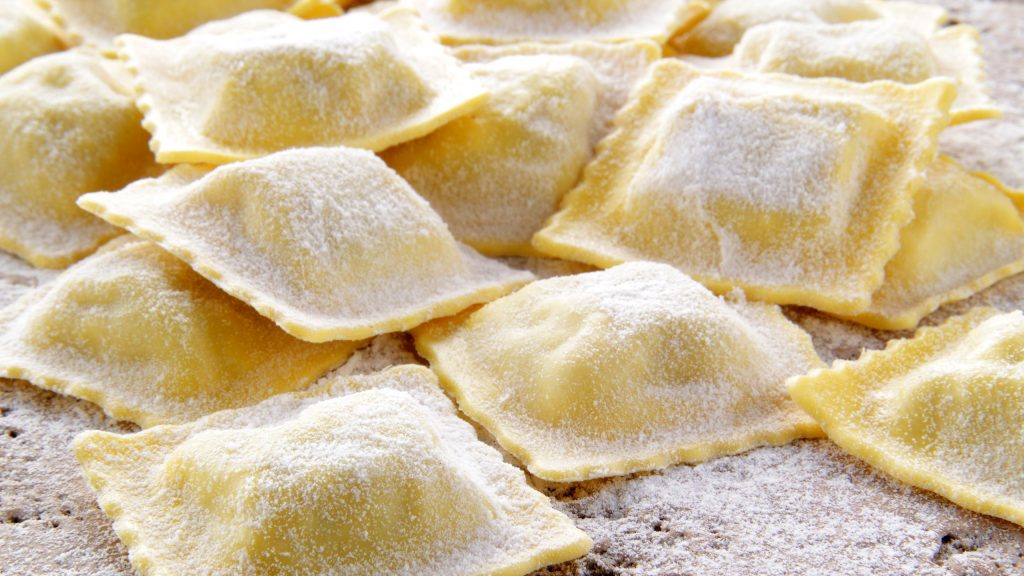 Recommend: Spaghetti is perhaps most known as a pair of tomato sauce and meatballs, but it might also be coupled with chunky sauces such as bolognese or light or cream sauces (such as carbonara). 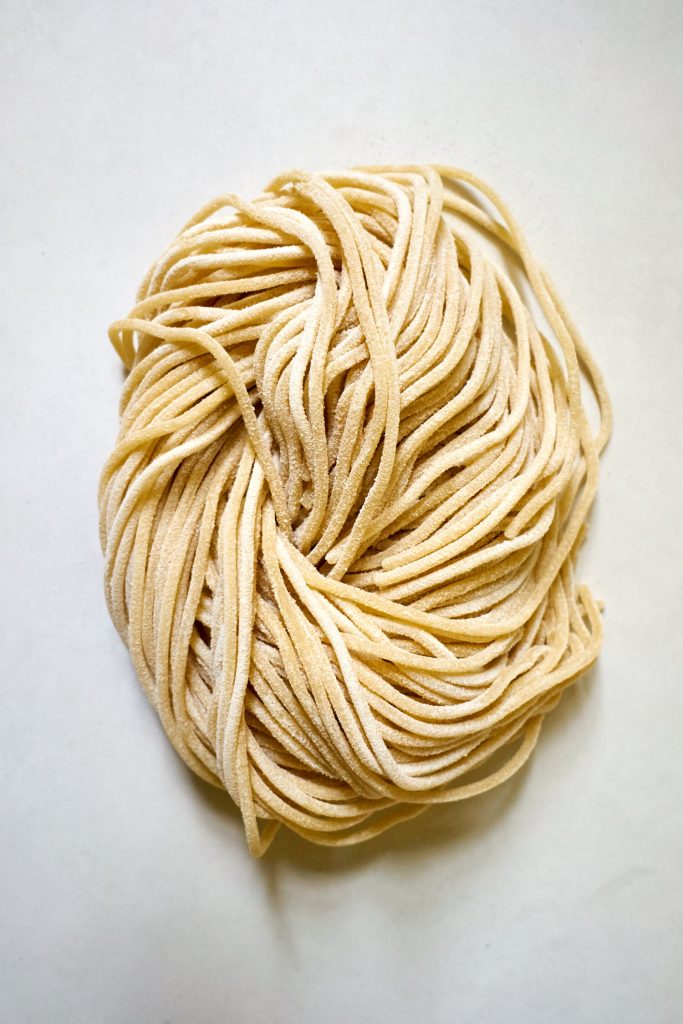 Recommend: Tagliatelle is commonly used by Italians because it combines well with chunky sauces like bolognese and meatballs and makes decorating and handling on the table easier. 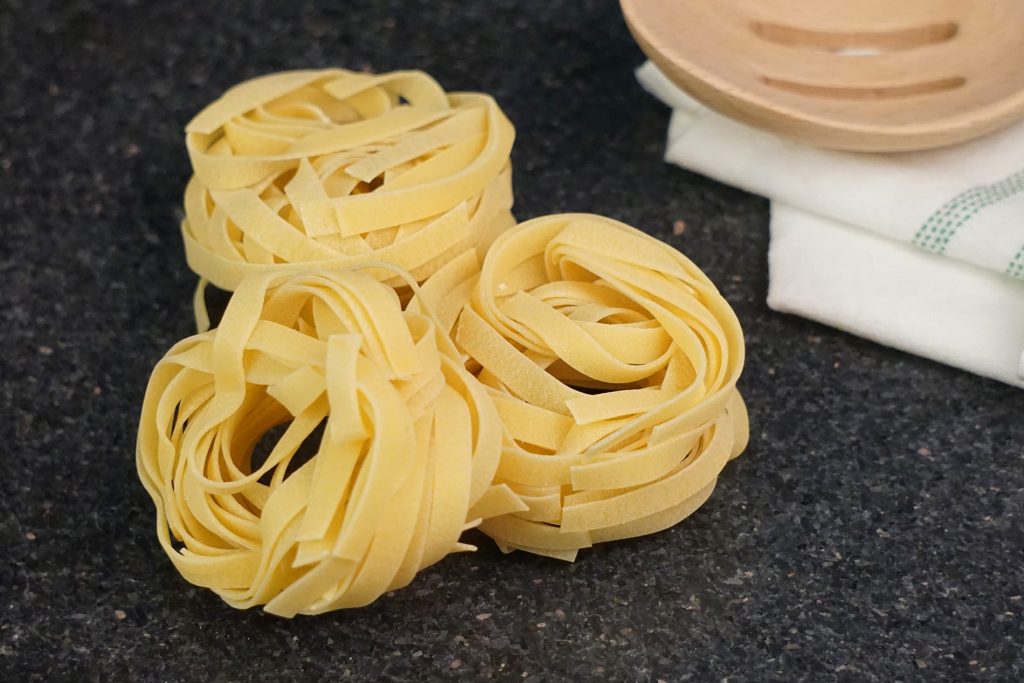 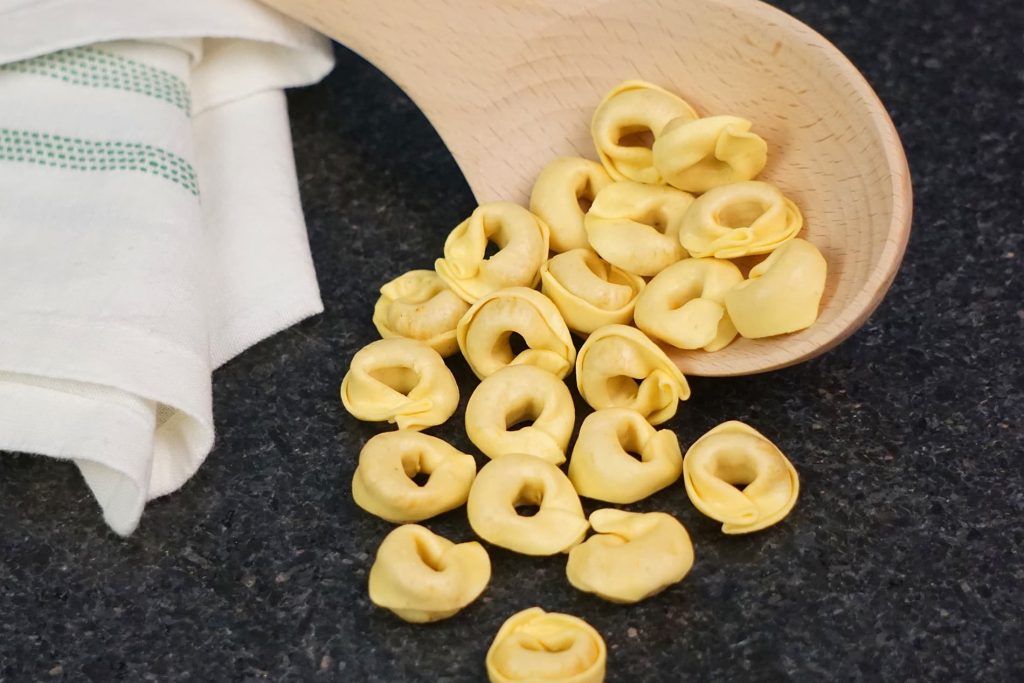 Come and grab your favorite pasta and compatible sauce for a hearty family dinner at Annam Gourmet!

One of the most well-known viennoiserie in France, second only to the croissant, is undoubtedly the Pain au chocolat, also known as the chocolatine – the never-ending debate amongst French with this pastry-name that made this iconic viennoiserie much more special than others!

French cuisine is well-known for their pastry or viennoiserie with multiple kinds of baked goods. Alongside with croissants, pain au chocolat is the most ordered breakfast item. It is a type of sweet pastry consisting of a cuboid-shaped piece of yeast-leavened laminated dough, similar in texture to a puff pastry, with one or two pieces of dark chocolate in the centre. Pain au chocolat is made of the same layered dough as a croissant, often sold still hot or warm from the oven, and paired with coffee eaten at breakfast or as snacks.

When ordering the French puff pastry with chocolate inside, the great majority of French people, as well as visitors visiting the nation, use the phrase “pain au chocolat.” However, in the southwest part of France, it is known as “chocolatine” and is regarded as a source of regional pride.

What exactly is the difference?

The problem is, there isn’t any! Both names relate to the same thing: a wonderful croissant dough filled with two dark chocolate sticks, which can be purchased for approximately 1€ (25,000 VND).

This delicacy’s name varies depending on the area of France you live in. That’s why the way you call pain au chocolat or chocolatine will reflect your origins.

What about other countries?

In Belgium, the French-speaking country, the words “couque au chocolat” are also used. Other nations, such as Spain, call it “napolitanas de chocolate”. But France can never reach a consensus on this hugely divisive topic. There is one thing everyone in the country can agree on: it is NOT named a chocolate croissant. 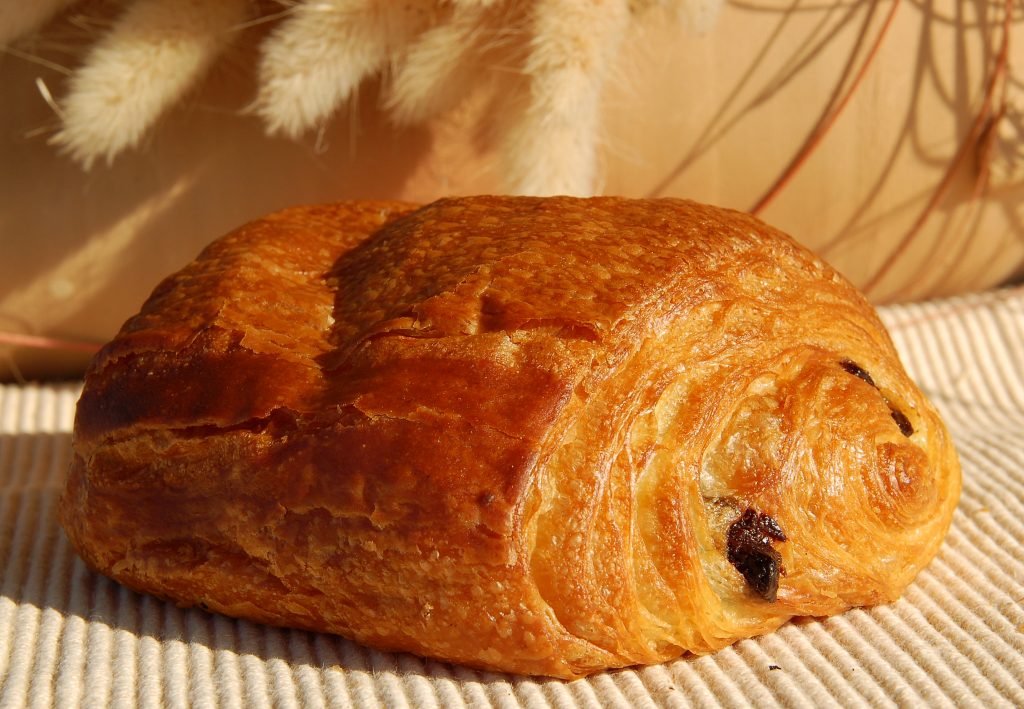 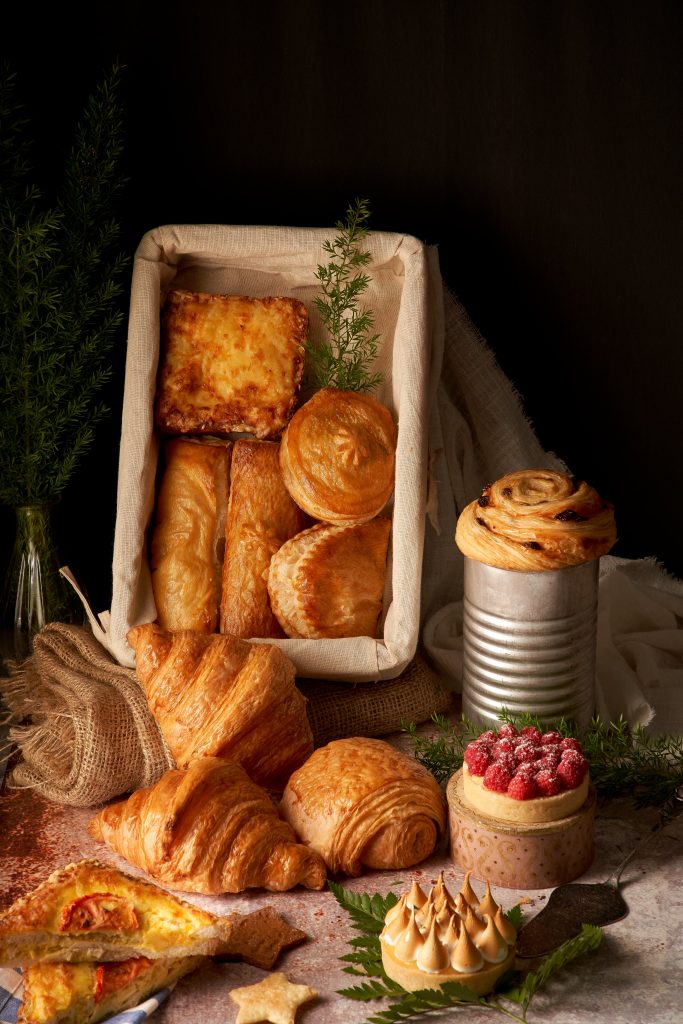 Waking up to the sweet and spicy aroma of these Apple Cinnamon Pancakes is the most enjoyable, healthy-fragrance moment of the fall days.

While “fluffy” and “gluten-free” are rarely used together, with our finest gluten-free recipes, the incorporate nutritious components not only make the best typical breakfast tastier, but also lighter and fluffier. We would like to share the 3-in-1 flavorful recipes including: sweetness from pancakes; sourness and freshness of apples, and spiciness from cinnamon.  We think this recipe is especially great—perfect for littles, company, holidays, or a sweet morning-time treat anytime. 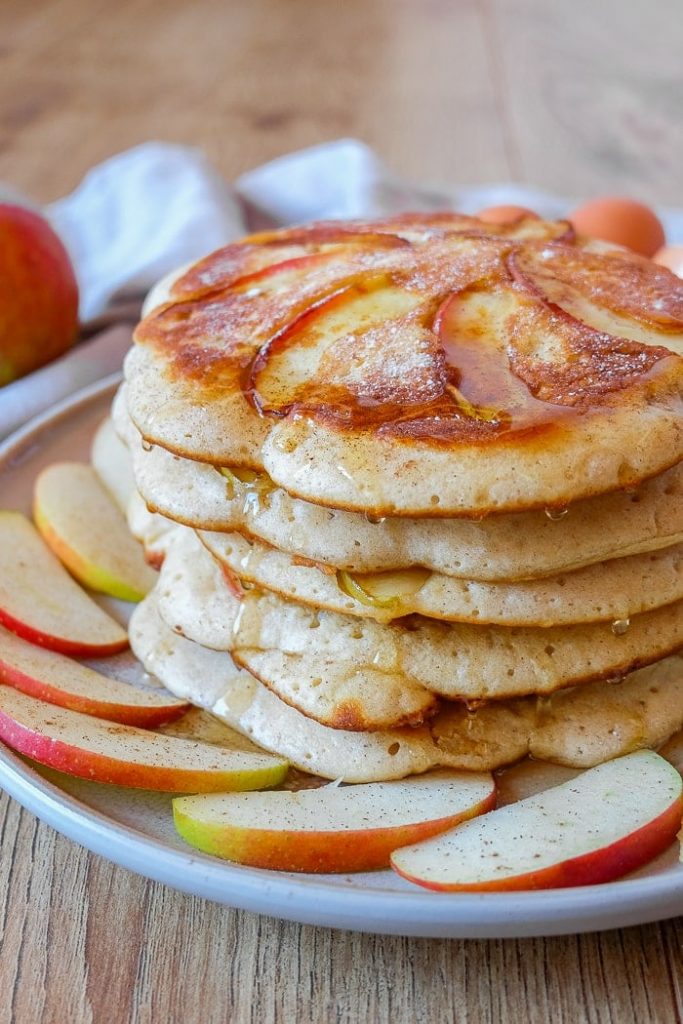 September 2nd is right on the corner. Let’s get it ready with an incredible recipe to cook with Lamb Rack Frenched Cap-off for your epic home party!

Rack of lamb is a fantastic roast centerpiece dinner since it is both visually appealing and surprisingly simple to make. This “best part of the neck” is considered the most costly cut of lamb, undoubtedly, one of the most precious parts. One of the best ways to cook a rack of lamb and keep its moisture is to sprinkle it liberally with garlic, rosemary, olive oil, and salt before roasting. The dish needs only five ingredients and takes only 10 minutes to prepare. Besides, you can easily pair it with a variety of side dishes, including risotto, green salads, and roasted vegetables.

In a mini food processor, combine the garlic, rosemary and olive oil and process until the garlic is finely chopped. Season the lamb racks with salt and pepper and rub the garlic-rosemary oil all over them. Set the racks fat side up on a large rimmed baking sheet and let stand for 1 hour.

Preheat the oven to 450°. Roast the lamb in the upper third of the oven for 15 minutes. Turn the racks and roast for 10 minutes longer for medium-rare meat. Transfer the racks to a carving board, stand them upright and let rest for 10 minutes.

Carve the racks in between the rib bones and transfer to plates. Serve right away.

The sweet and sour notes of red apples in the dry French cider Val De Rance L’Authentique Cidre Rose create the perfect balance for the fatty flavors and intense aromas of the lamb dish. 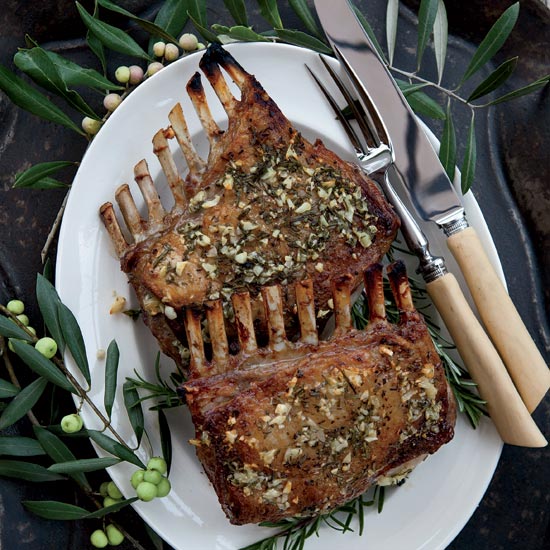 *Customers can also receive up to 3 spins/day during the promotion period.

Fast, safe, and convenient with Super Cashback when paying with Momo e-wallet today with Annam Gourmet!